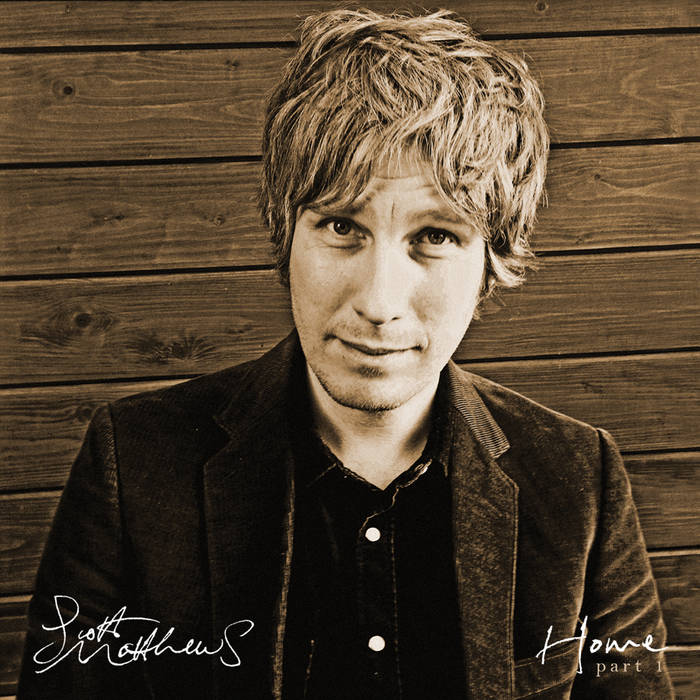 William Munny I have been a fan of yours for a while now......this album is simply fantastic......love every second of it.... Favorite track: Virginia.

We all have our personal definitions of Home. For many of us, Home evokes images of familiarity, contentment and love. All of these themes are covered on Scott’s poignant new album Home part 1.

This album sees Scott return to his Midlands’ roots to produce this deeply personal fourth album. Drawing upon his exceptional song writing talents, for which Scott won the 2007 Ivor Novello Award for Best Song Musically and Lyrically, Scott has produced a collection of inspirational songs which were lovingly recorded in his purposely built home studio.

“Over the past decade I’ve gained a sound understanding of the recording process. Tips and techniques gained from working alongside gifted sound engineers have proved invaluable in the making of my first homemade album. Having been fortunate enough to make music in some inspiring recording studios over the years, I felt it was the right time to allow myself the opportunity to explore musical concepts without the financial constraints of an expensive studio. The home studio environment has allowed me to experiment with alternate takes of a song, rework arrangements, and make mistakes in familiar and relaxing surroundings. In challenging periods throughout the recording process, I’ve been able to take time out to reflect over a pot of tea, often working into the early hours. The home studio has also enabled me to push musical boundaries, whilst acknowledging my limitations”.

During the recording process, Scott was aware of the dangers of becoming too isolated with his own vision, whilst also recognising the importance of taking a step back to allow him time to consider his musical aspirations. By fully immersing himself in the recording process – from the initial growth of a guitar progression into a full blown song and then into the realms of capturing it as a piece of audible art, Scott was able to achieve all of this and more in his home studio.

For Scott spontaneity is the key, as ‘overthinking’ tracks can lead to loss of authenticity. A more personal album than previous releases, Home part 1 has an intensely comfortable and relaxed feel, conjuring images of security and contentment, allowing fans to experience a more ‘stripped-back’, and deeply personal selection of songs. With Home part 1, Scott’s goal was to write a set of songs that he will be able to reflect on in years to come. However, instrumentally, there is a familiarity to the soundscape with acoustic/electric guitars, cello, piano, flute, flugelhorn and drums dominating the field.

Scott has a natural ability to fuse together his thoughts, musical ideas and scraps of words that are embedded in his subconscious, together with inspiration gained from situations such as driving, staring into a cup of coffee or walking in the picturesque hills of the Long Mynd in Shropshire. Scott has become increasingly aware of why his roots remain firmly planted in the Midlands. These stable roots continue to allow Scott to develop as an individual. JMW Turner’s depiction of the Black Country in his painting ‘Dudley’ prompted Scott to consider how the great ‘painter of light’ viewed the land on his doorstep – a land he has always lived and breathed – the concept of which appears in ‘Let’s get you Home’.

Whilst real life experiences are often the inspiration for Scott’s writing, he is often inspired by articles in local newspapers, together with the work of writers such as Alan Sillitoe and Robert Frost. Scott has been profoundly moved by the iconic photography of Robert Wiles which has inspired the only piano-based song on the album, ‘86 Floors from Heaven’, while Magritte’s ‘The Son of Man’ has influenced ‘The City and the Lie’. Home part 1 sees a continuation of stories and characters from some of Scott’s previous songs. ‘Mona’ is a prequel to ‘Up on the Hill’ from his Elsewhere album. ‘The Outsider’ has an ongoing theme, based around the character in ‘Passing Stranger’. Musically, Scott has channelled his inner Morricone in his first full length instrumental track ‘The Clearing’.

By constant musical experimentation, Scott has rediscovered a more minimalistic musical style. Adopting a more familiar, understated approach, Scott has discovered a safe and nourishing environment in which his talents can flourish. For Scott, Home is where the heart is.

Bandcamp Daily  your guide to the world of Bandcamp

outré black metal, with a Victory Over the Sun interview and music from Liturgy and Jute Gyte.